My practice currently pursues two parallel lines of enquiry, one of making and one conceptual. I am interested in referencing familiar imagery whilst constructing ambiguous narratives which are the result of composite images. In my reading of the Art & Narrative chapter in Heartney’s Art & Today, I feel that my work is anchored within this genre which references fractured, constructed and implied stories. I am exploring making images with peripheral, childlike characters, placed like props or puppets within each scenario. Through these I am attempting to reveal a glimpse of a story, an encounter or game. There is a sense of play, but also a sense of the macabre. My work draws on literature, photography and the tradition of spectacle aiming to engage the viewer through a sense of unease and curiosity. The imaginary painted space uses both inside and outside environments and challenges perceptions of scale to emphasise tension and displacement. Through my use of colour I hope to create a sugary facade which tempts the viewer to spend longer examining the surface. In addition, I am interested in the notion of fluidity both in media and character and am beginning to use this to enhance ambiguity, building on themes explored by photographers such as Claude Cahun and Francesca Woodman. Collecting, manipulating, constructing and layering are processes which compliment my ideas and support the evolution of my work

Feedback - The group response to my statement was mainly positive. The only real criticism I was given was my use of the phrase 'sugary facade' which they said didn't seem accurate. I included this statement because I have always intended my use of colour to entice the audience, capturing their attention before they realise that something more sinister or unusual is happening. Having considered alternatives for this phrase, perhaps I could use 'vibrant' or 'decitful surface', or 'complex' or 'surface which challenges the audience's initial perception'.

There were projections of these questions on the wall in the tanks, from a twitter discussion on the following ideas #tanks. In relation to my own work, I responded to the questions... 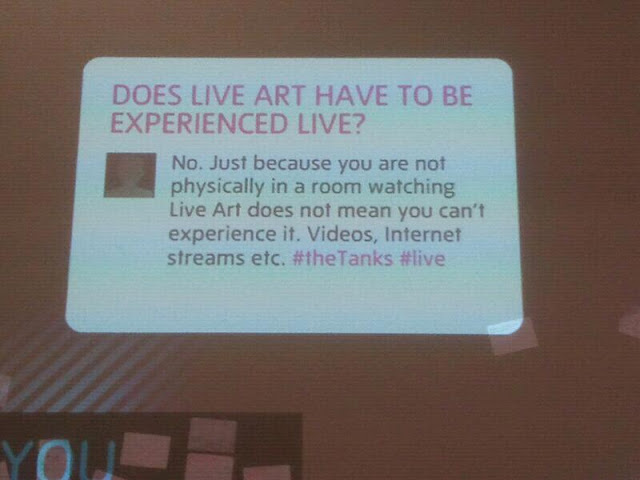 Does live Art have to be experienced live?
The experience of live art is integral in engaging the audience, it is more memorable, interactive and opens the viewer to living the experience of the work, as opposed to seeing or hearing something which is complete. However, the documentation of the work and second hand experience of it has value, giving the work a life beyond the performance and duration of the 'live' experience. For my own work this is a difficult idea as the work would generally be 'finished' before the viewer engaged with it, unless it was an open studio setting. I like the idea of a performance or gathering which is then documented and preserved in the painting. 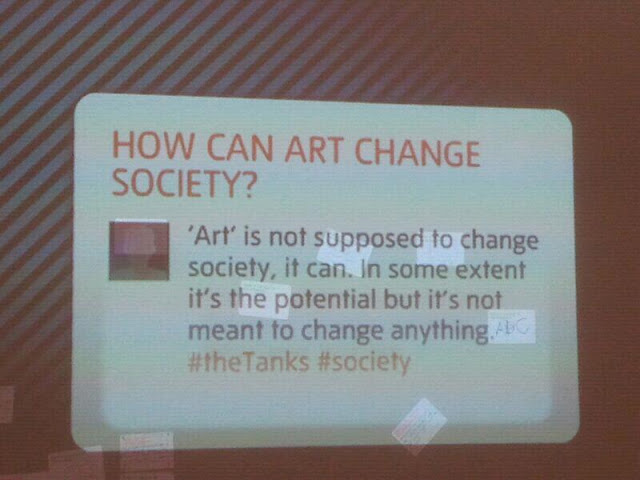 How can Art change society?
This is such a global question - I think that Art can change society by introducing and exploring ideas which are difficult to communicate, and perhaps not in the 'mainstream', giving the audience opportunities to become more open and informed. It can bring disparate groups together but also create conflict. Art can make global issues relevant through personalisation. I need to understand this concept better... 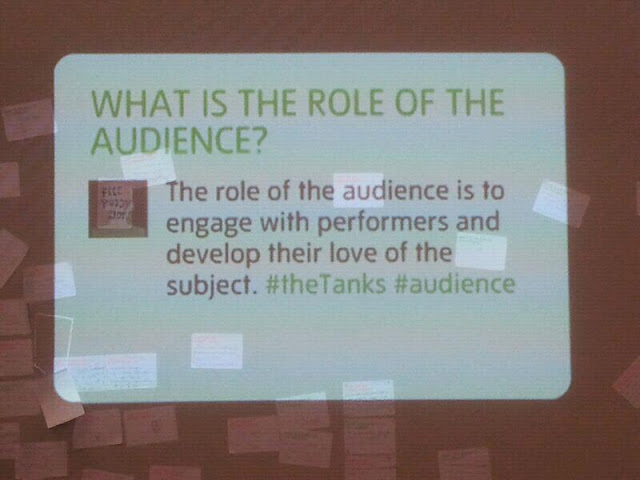 What is the role of the audience?
To activate the work through engaging, responding and forming their own opinion. The audience creates a dialogue with and about the work which gives it meaning. 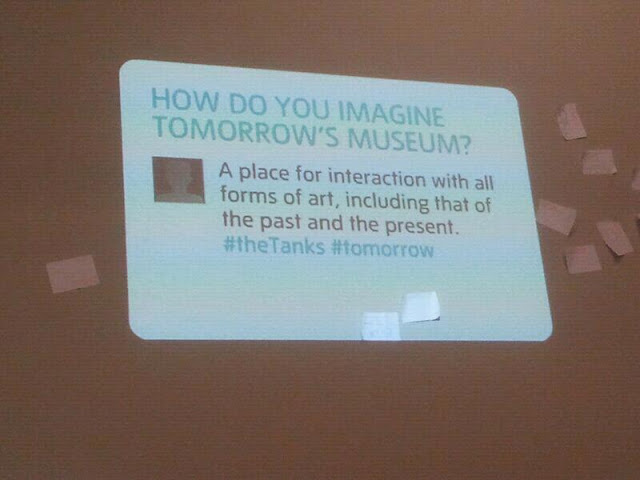 How do you imagine tomorrow's museum?
I hope for a space where there is more dialogue with the artists and processes of making are valued and transparent. Also, art being taken to groups who wouldn't usually visit galleries to increase exposure and art education. Unfortunately I think it will be largely online which so it will be unusual to encounter work in person; the environment and three dimensional space of a gallery are fundamental in the way the viewer encounters the work, so I hope that this will be maintained.

Notes on paintings made end of September  - Highlighted are the references to writing and artists which are emerging in my work; the reading has informed and identified where my work sits in a contemporary context. 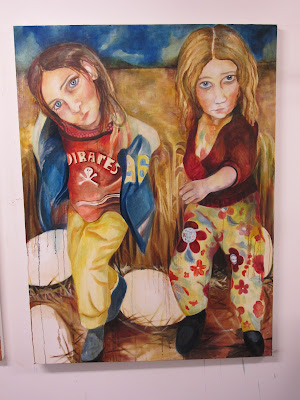 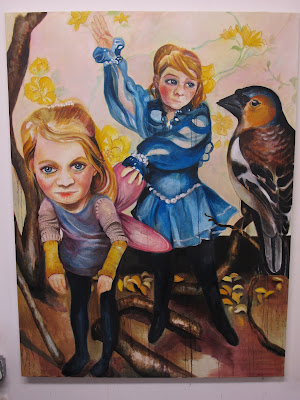 Pair of figures – interact with each other, Paula Rego 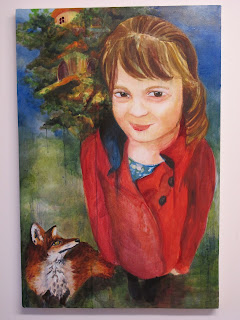 This was a very useful exercise to identify exactly how my ideas and intentions are emerging from my work. It also enabled me to spend time in my studio without working which meant that I could step back from the making process and write objectively. It has also been useful in identifying recurrent themes and areas of crossover, for example my artist references are photographers; I need to really push this and explore why they are relevant to my painting practice. These ideas should underpin my artist statement.


My work is anchored in narrative painting which references fractured, constructed and implied stories. I am interested in referencing familiar imagery whilst constructing ambiguous narratives which are the result of composite images. I am exploring making imagery with peripheral and childlike characters, placed like props or puppets within each scenario. Through these I am attempting to reveal a glimpse of a story, an encounter or game. A sense of the macabre and quiet playfulness is suggested by the compositions, tempting the viewer to spend longer examining the surface. The direct and confrontational gaze of many of my figures intends to challenge and disconcert the audience, presenting a profound psychological state.


My work draws on literature, photography and the tradition of spectacle aiming to engage the viewer through a sense of unease and curiosity. The imaginary painted space challenges perceptions of scale and uses context to emphasise tension and displacement. I value the skill and process of making and take control of the canvas’ surface to create contrast between the absurd and the beautiful. Collecting, manipulating, constructing and layering are processes which compliment my ideas and support the evolution of ambiguity in my work.

Caroline felt that the content of my statement was getting there and that I had a strong opening statement. However, she said that it was written in a very clipped style, statement. statement. statement. I also felt this when I reread it. She said that I should make it more literary and add examples, for example the type of literature I draw on. I am going to revisit this again and flesh it out and include some semi-colons! I think I will probably write my essay and then use this to re-write the artist statement as I will have further developed my ideas. We also spoke about the length of the statement - it is too short...I am going to decide what the statement is for (wall, online, application) and write it for this audience.