It is unusual for me to draw as a starting point in my practice. These are my initial sketches exploring viewpoint and movement - very faint. Thinking about the viewpoint of the audience, I wanted to create the impression of the viewer being low down by manipulating the figure so she comes towards us with her feet. I also played with the figure jumping and being manipluated, awkward, doll or puppet-like. 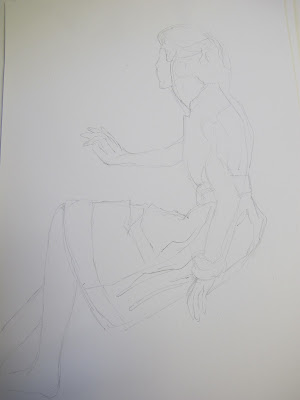 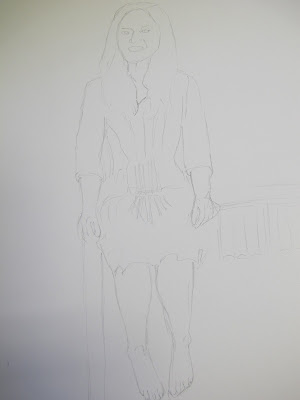 I am interested in drawing and markmaking, but use collecting and collage more actively in my practice. I don't keep a sketchbook as I feel the blank pages are slightly intimidating; instead I make quick sketches or draw into collages and keep them loose leaf or compile them later.

Jenny Saville has used drawing more obviously in her more recent work, working in charcoal on layers of tracing paper to create multiple, shifting images. I have experimented with working on tracing paper which is satisfying because of the smooth surface but messy. I like the idea of generating layers of drawings in the same way I would approach layers when painting with oil as I feel it gives a sense of fluidity, transience and strangely seems unsettled, like the drawing could lift or drop from the page.
Very early on I started looking at Vee Speers 'The Birthday Party' which is presented 'with a façade of fantasy but with a pared down aesthetic that amplifies the visual intensity through its simplicity'. http://www.veespeers.com/about.php
Although her figures are very static I like the direct gaze, the costuming and the sense of ambiguity in the photographs. I experimented with drawing one of the photographs on tracing paper to make it more ephemeral, the experimented with placing it over a collaged image to superimpose and create layers. 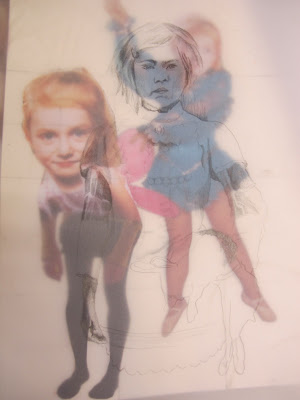 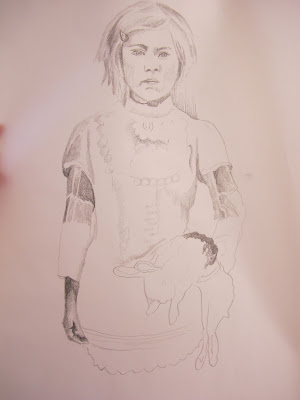 Tracey Emin's use of monoprint to create her distinctive scratchy, monochrome drawings really inspire me to use mark making. I prefer the appearance of printed lines to pencil or graphite; this may be because it has a sense of colour and appears more fluid, relating to painting. I have experimented with quick mono printing and drawing in pen to explore line - I like the graphic quality of these pieces but don't think they would hold the viewer's attention for long enough.

I worked closely with Lucy from my studio to learn the drypoint printing technique. This figure came from my playing fairy painting, although I have cropped the top of the head. 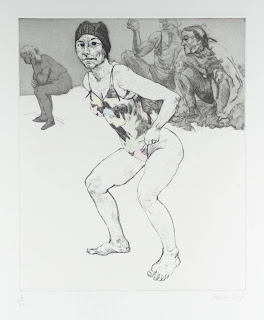 I had been looking at Paula Rego's work 'Pendle Witches' and felt that the graphic element added a sense of unease. The lack of colour is disturbing to me as I enjoy saturated colour, but at the same time the focus on mark making made me think more specifically about the weight of the figure. The dots on the right side of the face were made using a stabbing action and appear in my opinion, almost pox-like. I intend to print a series of the same image so I can experiment with hand colouring, as well as extracting different characters from my recipe book and other paintings.

Since learning the drypoint technique, I have experimented with using different printing inks and hand colouring but I prefer the more graphic, payne's grey prints as they are so starkly different to my paintings, introducing a more sinister initial impression.