I started making this painting marginally after the other two and broke away from my intention to include two or more figures in an image. Instead I placed a fox at the feet of the figure, and later a treehouse in the background to juxtapose different elements. Using the same stance, I replaced the head and clothing of the figure while still keeping the high viewpoint and distorted perspective at the feet. 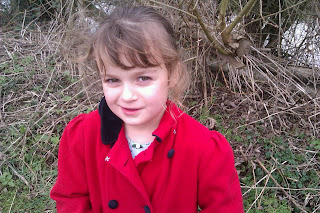 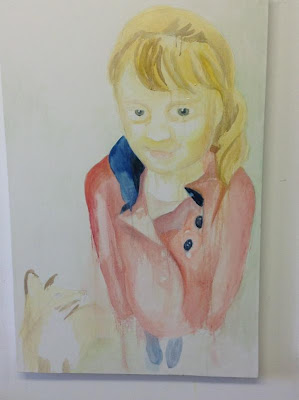 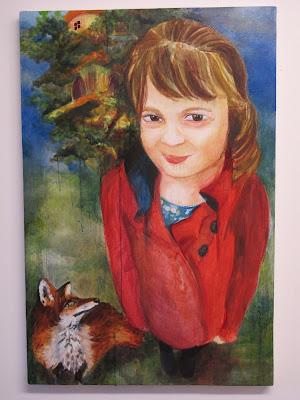 What is your art practice about?
This piece appears more fairytale linked than the other narrative pieces, but it was not originally intended to be so. I wanted to suggets a sense of secrecy, a hiding place through adding the treehouse. There is also a reference to theatre flats where a shadow is cast on the tree by the girl, although the girl is suggested to be much nearer to the viewer. I manipulated the different viewpoints to lead the eye around the image, and gradually concealed the treehouse more and more with glazes of foliage to build ambiguity.

How has your work developed in the last six months? What do you wish a viewer to derive from the experience of viewing/hearing your work?

Before this unit, I may have chosen the face of this girl and created a head and shoulder portrait on a plain or empty background. However, I created a hybrid figure which played with viewpoint to make the viewer encounter the scene with a sense of storytelling, and using their own memory of childhood to identify with the work. I deliberately distorted the fox and drew a parallel between the feet of the fox and the girl to refer to the idea of the mirror. Her tattered hunting jacket is suited to the outdoor environment; she almost reminds me of the Red Riding Hood from Roald Dahl's Revolting Rhymes, a much more canny and manipulative character.

How do you position your practice in a contemporary context?


During a group crit, C said that the treehouse emerging from the girl's shoulder reminded her of Louise Bourgeois' 'Femme Maison' series. I think this was quite an ambiguous and perceptive link - the intention is different but the architectural and human form merging reflects my interest in shapeshifting and mask. My original intention was to skew the viewpoint in the painting so the viewer appeared to be looking down on the girl and the treehouse grew behind her to add a sense of context. However, I felt that these two elements should be physically joined to make the composition more awkward.

The Bourgeois reference also made me think of the sculptural work of Emily Speed, where the work is worn or inhabited. It functions a shell which protects the artist inside but also creates a claustrauphobic space which cannot be seen out of. There is potential here in terms of creating structures which grow on or emerge from a figure or figures. This could lead to a more indepth enagagement with shapeshifting and scale.


Reflection
What criticisms might be made of your work?
A criticism of this work might again be that the space between elements in the painting isn't believable. It was suggested to me that I could make more of the layers, and emphasise the layers and idea of theatre flats; however I feel that I would like to improve my painting skill to convincingly create space with perspective and manipulated scale, without the elements looking flat. I know this is something I need to practice as it is a concern I have with all my paintings. This image may also not be awkward enough in that that the ambiguity comes from my practical knowledge rather than intentional communication. 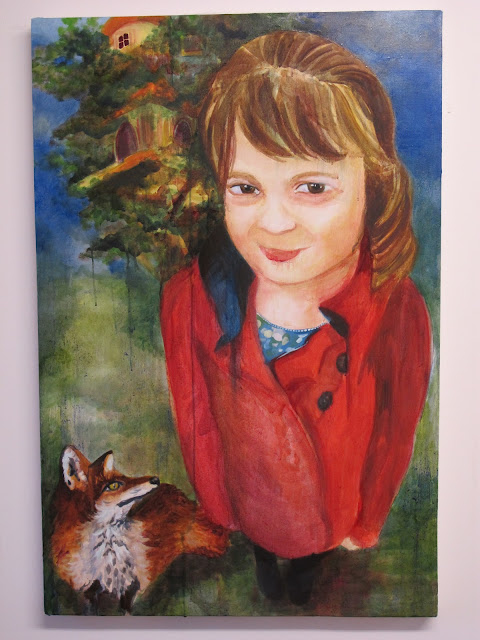